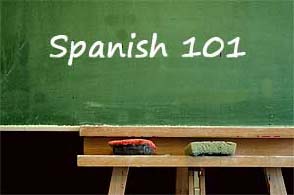 Regardless of your chosen your career, one of the best career choices you can make is to learn a foreign language. Our Spanish for Beginners - Spanish 101 course, along with our conversational Spanish course, will open the door to another culture and enhance your career opportunities not only in the United States, but also in Mexico Central America, and South America. Possessing strong Spanish skills will give you an edge when applying for many job openings. Your unique ability will set you apart from other applicants, in fact, other applicants will seem lazy and unmotivated in comparison. Your ability to speak Spanish will clearly demonstrate to a potential employer that you have self-discipline and you can keep focused on a difficult goal until to achieve it.

So, you want to study Spanish so that you can travel the world and have a brilliant career instead of being stuck in some cubical like all your twenty-something friends. Great! With adrenaline pumping through your veins, you quickly master the Spanish Listening Practice. Bravo! Of course, after the initial enthusiasm wears off, you discover that you must come face-to-face with your nemesis: The verb table! Many people who study Spanish have told me about the feelings of panic that comes over them when they are faced with those rows of words lined up like an army of Mexican solders scheming how to defeat the gringo who wants to learn to speak Spanish.

In truth, one should not fear grammar rules when beginning to study Spanish. The grammar rules exist to bring order to the chaos which is the Spanish language. The grammar rules are your only hope in making sense of Spanish. I never had much interest in Spanish grammar until I was fifteen. I wanted to date a beautiful young girl, but I had no money. My mom gave me the idea of earning extra money by tutoring younger students with their Spanish homework. And while I was reviewing the seemingly thousands of Spanish tenses, the pluperfect, imperfect and the subjunctive, etc., I began to realize that these were very similar to patterns which I had already learned. I finally discovered a benefit of all those years I spent studying French verbs in primary school.

Grammar is a not a nightmare, it’s a life-raft in a sea of randomness. The key to turning grammar into a helpful friend and not an endless nightmare is to be aware of when it makes sense to study the rules. If you spend too much time studying the grammar rules, this will not serve any purpose. You will find that they more you use Spanish in the street, in other words, the more context you add to Spanish, the more useful it is going to be.

I had a friend who studied Spanish grammar for many years with expensive private tutors. He never used his knowledge by speaking Spanish due to his fear of making a mistake. On the other hand, I learned just a few grammar rules, got a job attending to customer in Latin America, spoke Spanish poorly every day, and received several promotions because of my Spanish ability. After a few years, I moved to Brasil and learned some Portuguese while working on water purification projects. When I returned to live in the United States, I took the time to learn Spanish grammar and a truly enjoyed the experience. Meanwhile, my friend who studied with private Spanish tutors for so many years, never spoke Spanish at all.

Unfortunately, most Spanish courses give a learner the grammar rules and a few examples, then they go on to the next rule. We approach teaching Spanish very differently. As soon as we teach you anything new, we immediately integrate it into all our games and quizzes and flashcards, etc. You will never find yourself asking the question “How would I say this in Spanish?”, because you’ll be saying it in Spanish from the very moment you learn it. this is why so many people have had success using our website to study Spanish.

How to Use Spanish 101 Resources

Studying Spanish will also improve your English language skills. Learning Spanish grammar is an important way to get a better handle on English grammar. Expanding your Spanish vocabulary will require you to think about the roots of words and their meanings. It is impossible to learn Spanish without learning something about Spanish culture along the way. This will increase your capacity to understand the challenges of cross-cultural relations - an extremely valuable skill in international business and politics. As the process of globalization continues, countries become more interconnected and cross-cultural communication grows more important every day. Knowledge of Spanish will allow you to enter a wide range of fields which someone without Spanish language abilities would not be able to enter. Interested in a career in health care? Spanish is essential to successfully treat Spanish-speaking patients. Intrigued by South American history? You better study Spanish if you want to have access to authentic sources. Curious about Pan-American politics? You should be reading the major news sources from Argentina and Mexico. All in all, studying Spanish strengthens your professional credentials and will make you more competitive in whatever career you select. I can tell you from personal experience that having strong Spanish skills will open many doors. When I was a young man, I taught myself Spanish by listening to cassette tapes and reading the Spanish bible. I was given the opportunity to work and live in Latin America. Without boring you with the story of my life, I can tell you that I eventually went into the jungles of Latina America and I came out a millionaire.

The color of my new room, modesty feathers, beautiful beaches, the feeling of sand on your feet, stick figures, whole punch dots, watching ian try to dance, rings given to you by special people, shopping, love potion number nine, playing with moving men, water balloon fights, first kiss, loud music, giving people love bites, pasta, stray nights in Arizona, homer Simpson, petting soft thing, comfy clothing, half birthdays, when leaves change colors in the fall, blowing on glass then writing something, deeming lights, moonbeams, jew camp, the name Fender, the color brushed tooth, chest children, meeting new people, sunsets, roller coasters, being in love. I started with Spanish, did some other stuff then somehow i ended up with just as much Spanish as i started with. i talked to my Spanish teacher who i am officially scared of and got a new Spanish text book. well my Spanish book is officially lost. i am going to see my Spanish tutor in a little while... she is the nicest person, but i just feel so stupid when doing anything involved with Spanish, i really do hate it. at lunch Patrick helped me out with my Spanish diagnostic test that i didn't complete. i seriously dread going to Spanish. Now for the only bad part of my day...Spanish...need i say more?

This websites gives educators, program chiefs, directors, and guardians engaged with Spanish-English bilingual instruction programs with functional plans to help the advancement of perusing and composing programs in Spanish, utilizing proficiency approaches that are viable and enabling for Spanish-talking youngsters in American schools. It depicts study hall exercises, makes reference to Spanish youngsters' writing that underpins the proposed educational modules, and incorporates thought and agendas to enable educators to arrange and assess their Spanish proficiency programs. An early on section portrays how two educators present topical units on creatures, at kindergarten and fourth-grade levels, underlining either perusing or composing. The second section clarifies two distinct perspectives on the perusing procedure and presents proof supporting a socio-psycholinguistic methodology. Various ways to deal with Spanish perusing guidance are delineated and assessed in two ensuing sections, with positive options offered for practices that are not viable. Composing advancement is examined in parts 5 and 6, one committed to examinations of English and Spanish spelling. The last section depicts positive practices, recommends materials to help an advanced Spanish proficiency program, and gives methods to helping understudies move forward and backward normally among perusing and writing in Spanish and English.

I know nothing, and my teacher speaks only in Spanish, i just sit there with a stupefied look on my face. Now have to go learn 40 names and what their place in congress. i miss Matt and i studying Spanish while everyone else is asleep. Spanish. there is so much to learn and oh so very little time. after my mommy let me drive home from my Spanish tutor, i found a letter from Jonathan sitting in my place! i had a sub in Spanish too! which was good and bad. my Spanish teacher can be a total bitch, and bad. This Spanish project makes no sense. first off i don't even really know what to do b/c the directions are in Spanish and my teacher went over it, in Spanish proficiency. i did the work my group told me to do, and now i have to write a paper, in Spanish about what i found out. I also hate how whenever we have Spanish my teacher is upset about something, most likely the class before us, so she is all super bitchy and blah. after eating an early dinner, i took a 2 hour nap before i had to go to Spanish tutor.

The motivation behind this website is to share what we have gained from a progression of 4 logical investigations about forestalling perusing disappointment through early mediation with local Spanish-talking understudies who are battling students. The objective is to give direction to professionals about compelling practices for working with local Spanish-talking youngsters who are attempting to progressed toward becoming students utilizing proof as opposed to guess and supposition. To begin with, the technique and discoveries are outlined from every one of the logical investigations, English and Spanish, looking at supplemental perusing intercession that was given notwithstanding center perusing guidance in first grade. Second, the supplemental intercessions are itemized. Next, parts of guidance that seem to sum up from what we think about avoiding perusing disappointment among local English speakers are talked about. Last, the kinds of changes made to this guidance so as to suit the requirements of English language students are inspected. Results affirm that local Spanish-talking youngsters profited by express, orderly guidance that mutual a significant number of similar components that have been demonstrated to be compelling with local English speakers. Further, English as a second language showing procedures (i.e., utilization of solid motions and visual guides, reliable and rehashed schedules, and utilization of rehashed phrases and predictable language) profited local Spanish speakers who were attempting to figure out how to peruse in English. Be that as it may, little exchange of learning starting with one language then onto the next was distinguished.