The preterit and imperfect are simple tenses of the indicative that refer to a past action or state. Sometimes they may have the same English translation, but they have different meanings or implications, as in the following example:

Ayer estuve feliz.
Yesterday I was happy. (today I am not)

Ayer estaba feliz.
Yesterday I was happy. (today I may or may not be: I’m not saying)

De pequeño fui a Nueva York.
As a boy I went to New York. (once, presumably)

De pequeño iba a Nueva York.
As a boy I went to New York. (habitually, presumably)

A habitual action in the past (normally expressed in English with “used to” or “would”):

Siempre íbamos a la iglesia los domingos.
We always used to go to church on Sundays.

A series of actions that took place simultaneously:

Los niñas cantaban, los niños jugaban, y los perros ladraban.
The girls were singing, the boys were playing, and the dogs were barking.

A past action or state in progress. In English we often use the past progressive (“was/were ...-ing”) to convey this nuance:

Caminábamos tranquilamente.
We were walking in peace.

Mientras ellos miraban...
While they were looking on.

Descriptions in the past (because they are, in a way, a past action or state in progress):

De pequeña tenía el pelo liso.
As a girl I had straight hair.

Information about the time of day, the date, age:

Expressions about the weather when they are background information, not when they indicate a change or the start/end of a state, in which case the preterit is used:

Hacía frío y llovía.
It was cold and it rained.

A las 5 hizo mucho viento.
At 5 it was very windy.

Mental states (in progress) in past time.

Creíamos que te habías ido.
We thought you had gone.

El accidente ocurrió a las 8.
The accident took place at 8.

A series of sequential actions in the past:

Fui a la tienda, compré leche y regresé a casa.
I went to the store, I bought milk and I went back home.

The beginning or the ending of an action or a state, or any change in a past state:

Me enfadé muchísimo.
I got very angry.

An action that interrupts a previously existing action or stated (normally expressed in the imperfect).

Verbs that seem to “change meaning” in the preterit (with respect to the infinitive and the imperfect).
There is no change in meaning but, rather, a change in the way we translate the different nuances in English. These are the most common such verbs:

imperfect -> knew, used to know
preterit -> met, made the acquaintance (of someone)

Los conocía en Tailandia.
I knew (used to know) them in Thailand.

Los conocí en Tailandia.
I met them in Thailand.

haber: there to be

Había mucha gente en la escuela.
There were many people at the school.

poder: to be able to, can

¿Podías trabajar con tanto ruido?
Were you able to work with so much noise?

¿Pudiste trabajar con tanto ruido?
Did you manage to work with so much noise?

querer: to want, to love

De pequeña quería ser doctora.
As a little girl I wanted to be a doctor.

Más tarde quise ser ladrona.
Later on I wanted to be an thief.

no querer: not to want 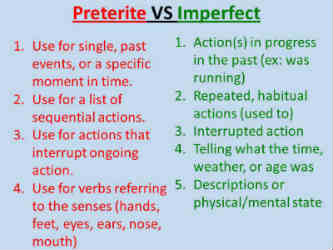